The brewery began as a weekend hobby between brothers. We would get home from classes on Fridays and immediately start preparing for a long weekend of brewing. It got to the point where we were juggling three different 5-gallon batches of beer every weekend; each at different stages of brewing. 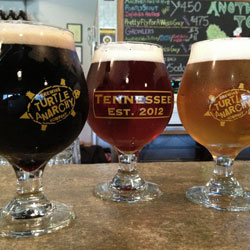 We brewed all different styles of beer: pale ales, stouts, pumpkin ales, apple ales, and even the occasional imperial hefeweizen. It was during these early brews that we discovered and shaped the kind of brewery we wanted to become and after a semester of brewing and drinking, Turtle Anarchy Brewing Company was born.

In February 2012 construction began on the brewery in Franklin, TN. We installed a 15bbl brewhouse, 4 – 30bbl fermentation tanks and a taproom, all within 5,600 square feet. On July 5th, 2012 we opened our taproom for the first time and served our beers to a crowd of eager tasters.

Distribution to bars and restaurants began soon after the taproom opened. At first, we self distributed in and around Franklin, TN. That quickly became a challenge, so we signed up with a local distributor and never looked back.

Our beer quickly spread in Nashville and Murfreesboro, and later in 2013, we began selling beer in Knoxville and Chattanooga.

Growth is a Good Problem

All of our beer, up until this point was sold in kegs. What comes second to that? Getting our beer into cans. We began working on different scenarios for adding more fermentation tanks and a canning line to our brewery; we found we exceeded our floor space. The next step, expand and move to a larger brewing facility.

Making the Move to Nashville 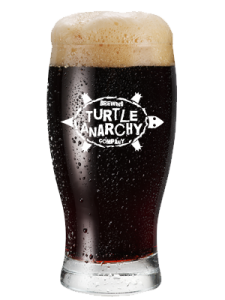 We found a suitable space in the Nations Neighborhood of West Nashville. It has 28,000 square feet and much higher ceilings than our Franklin brewery to allow for taller fermentation tanks. Construction began in March 2015. We installed a 30bbl brewhouse, 13 fermentation tanks of all different sizes, a canning line, a bottling line, and even a small kegging line.

We use cookies on our website to give you the most relevant experience by remembering your preferences and repeat visits. By clicking “Accept All”, you consent to the use of ALL the cookies. However, you may visit "Cookie Settings" to provide a controlled consent.
Cookie SettingsAccept All Reject All
Manage consent

This website uses cookies to improve your experience while you navigate through the website. Out of these, the cookies that are categorized as necessary are stored on your browser as they are essential for the working of basic functionalities of the website. We also use third-party cookies that help us analyze and understand how you use this website. These cookies will be stored in your browser only with your consent. You also have the option to opt-out of these cookies. But opting out of some of these cookies may affect your browsing experience.
Necessary Always Enabled
Necessary cookies are absolutely essential for the website to function properly. These cookies ensure basic functionalities and security features of the website, anonymously.
Functional
Functional cookies help to perform certain functionalities like sharing the content of the website on social media platforms, collect feedbacks, and other third-party features.
Performance
Performance cookies are used to understand and analyze the key performance indexes of the website which helps in delivering a better user experience for the visitors.
Analytics
Analytical cookies are used to understand how visitors interact with the website. These cookies help provide information on metrics the number of visitors, bounce rate, traffic source, etc.
Advertisement
Advertisement cookies are used to provide visitors with relevant ads and marketing campaigns. These cookies track visitors across websites and collect information to provide customized ads.
Others
Other uncategorized cookies are those that are being analyzed and have not been classified into a category as yet.
SAVE & ACCEPT